WE ARE OPEN - COVID-19 ANNOUNCEMENT We’re proud of our rich history. We’ve been working with sheet metal since around 1910. Orville Gunther (1912 – 2007) gave the following history of the company in 2002: Carl Gunther emigrated from Germany in 1896 after his graduation from a four-year apprenticeship in the metalworking trade. He worked various jobs in Salt Lake City.

After he married, he purchased a small farm in Lehi and established a small sheet metal shop near his home about 1910. He named the shop “Carl Gunther Sheet Metal Works.”

In 1929, Carl was called to serve a mission for the Church of Jesus Christ of Latter-day Saints. His son Orville was a high school senior at the time. Orville had worked with his father and intended to continue in the trade after his high school graduation, so he ended up operating the shop during Carl’s absence. He changed the name to “Lehi Sheet Metal Shop” and later to “Gunther Sheet Metal Works.” After Carl returned, Orville worked in the business until he was called to serve a mission in Germany and Austria from 1931-1934. After Orville returned from Austria, the Depression was so severe that Carl had little work in the shop.

Orville changed his plans and studied teaching at BYU. He taught history at American Fork High School from 1936-1940. However, Orville still loved the trade and was anxious for the school day to end so he could work in the shop after school. Orville was asked to teach the sheet metal trade at Provo High School in 1940.

There was a shortage of skilled workers in all trades at the time. This was a federal program to train workers to become skilled in the industry in anticipation of the country’s engagement in World War II. The program later became Central Utah Vocational School and is now a part of Utah Valley State College in Orem. The shop grew as Carl and Orville continued to work together. In 1942, Carl was killed while working in the trade. Orville decided to leave teaching so he could operate the business full-time. He moved the business to 31 North 100 West in American Fork. He hired students from Central Utah Vocational School and men who were laid off from shops that closed due to the Depression and war.

Most of these employees were loyal and worked for many years at the shop. At the end of the war, steel was in short supply. Orville was able to buy steel and continue in business because of his knowledge and contacts. He branched out into the heating business, and later into the air conditioning business. Competition became very keen, so Orville made the decision to provide quality materials, equipment, and labor. 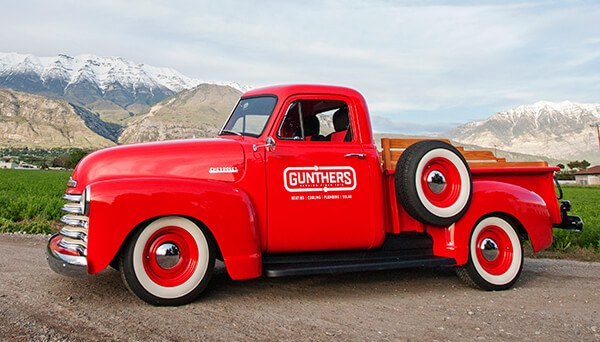 This philosophy turned out to be sound, as the company is the oldest operating heating and air conditioning business in Utah County. The business was incorporated in 1960. Orville’s son Dale became President when Orville was called to serve a mission in 1967. Dale changed the name to “Gunthers Heating, Cooling, and Plumbing” to emphasize the direction the company had taken with heating and air conditioning rather than general sheet metal. He also put more emphasis on growth, in commercial business as well as residential.

The company moved to 81 South 700 East in American Fork in 1985, where it continues today with the same philosophy established by Orville: “We will meet or exceed our customers’ expectations while we stay within the budget.”

Today, Gunthers Heating, Cooling, and Plumbing performs a variety of residential and commercial services. Contact us for a Utah air conditioning service and repair tune-up, furnace tune-up, and any other or any other HVAC service or repair.